10:25 PM | Posted by Unknown |
Edited the website for my work to give it an updated look:
http://www.therakidsinc.com

10:12 PM | Posted by Unknown |
Although I did use it for non-therapy purposes, I can easily see myself using the rest of the people cut outs I got from Michael's for some fun projects:

Was about $2 for a bag of 12. They have boy and girl shapes, and skin colored shapes. Don't have a bag with boys and girls together so I would suggest getting the bag with girl shapes and just cutting them to make it boys. 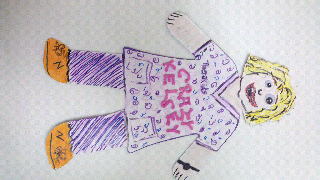 Target is on it!

10:10 PM | Posted by Unknown |
Went by Target for some supplies and had to snap a picture of their $1 goodies section.  Great lil products there. 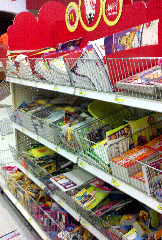 Target had some cute (and cheap) therapy cards in their bargain area. Check out this set of occupations! Great for working on "er" endings and vocabulary. 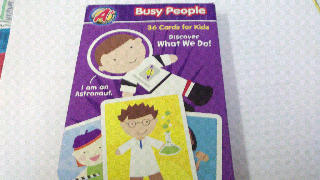 This made me giggle...

10:05 PM | Posted by Unknown |
As I've stated before, I'm a relatively "newly minted" speech therapist. I am fully licensed and now have my CCCs, but to put it in perspective, I graduated from my Masters program in May 2010. What does this mean? I still do have plenty to learn that the books just can't teach you!

So I would like to share about one of my most recent learning experiences --AAC Device Trials, Reports, and Other Joys...


Let me get less jargony here -- AAC stands for Alternative Augmentative Communication. This basically means any/all alternatives to using only verbal language. AAC includes things like gestures, complex gestural language systems (think: ASL), pictures, buttons you press to talk, and computers that talk for you. An AAC device is any type of electronic device that helps in communication efforts. There are things like a "BIGmack" -- a big button that can activate a mechanical device, or can hold a recorded message. On the more complex end of the spectrum are what we call "Speech Generating Devices" -- ones like an iPad or a DynaVox Maestro. These devices are used to generate speech -- whether it be an electronic, artificial voice, or a pre-recorded voice. There is a lot of terminology with AAC, and I hope to dedicate a post to some of the bigger ones to explain it better. But for now, this will have to do.

Although I studied AAC in graduate school, experience is the best teacher. I have observed AAC evaluations in the past (several) and have written mock AAC device reports. Recently, I conducted four AAC evaluations at my practice.

I have to say, my DynaVox representative is amazing. As I don't have a device within my practice, I naturally have a lot of questions about how to go about the process.

I do have to say though, the report that Medicaid currently requires for approval to cover AAC devices is a beast. It is a rather lengthy report, so prepare yourself. I'm still trudging through mine, but I plan to finish them tonight. Energy drink anyone?

DynaVox is really good about helping to make the process easier. I haven't dealt with any other companies, but it is promising to see that the process has been simplified.

An area of AAC that I really would love to get into is the use of iPads as AAC devices. I don't have an iPad right now, but in the future I do plan to buy one. A good AAC program on the iPad that I have seen in use is Proloquo2Go.

I will write more as I enter the next steps of the approval processes.

Update on Time Timer for Android

3:32 PM | Posted by Unknown |
As promised, I contacted the developers at Time Timer to ask if they were currently working on an application for Android phones.

Here is the very prompt reply I received:

Thank you for your email. We are working on the Android application and hope to have it ready this Fall. Please check back in September for the release. Thanks!

So watch out for it! For now, you can buy it for PC/Mac and iPod/iPad/iPhone

10:03 AM | Posted by Unknown |
Sale alert! The TimeTimer is on sale at MayerJohnson for today only. 20% off
http://www.mayer-johnson.com/time-timer-audible
Love it when timing works out perfectly
~*~
Labels:products,sale | 0 comments
Email This BlogThis! Share to Twitter Share to Facebook

Annnd... the new logo and look is out!

I tinkered a bit with my boyfriend's Mac today and made a logo for my website on a neat program he has. Took a while, but I also edited the settings for the background and layout.

Yes, I have ads. I thought it would be worth a try to add some ads in the blog. They seem to be related to the content, so woo hoo! I can't click them, but if you do, please comment and let me know if you do find anything useful.

I plan to make some buttons and other goodies for the rest of the page, but for tonight, this will do.

10:39 PM | Posted by Unknown |
Product Review Time! This is a product I learned about in graduate school that I am dying to purchase, but just haven't gotten around to it. It is - a Time Timer! (http://www.timetimer.com)

(Image from Time Timer's Flickr stream for marketing!) This is an awesome timer tool that you can use with children who don't have a strong grasp on the concept of time -- extremely useful for children on the Autism Spectrum or those with ADHD. It allows you to select what time you want it to count down, and it shows a visual (red) representation of the time as it counts down. If you are a newbie SLP, or someone unfamiliar with the use of visual supports -- I can't stress enough how amazing the use of visual aids can be. When an individual has a language delay, a concept like time can be really abstract. "We just have a little bit more work left..." "I want you to keep working for a few more minutes" "Keep working until I say it is time for our next activity!" Sure, you could tell that to a typically developing child, and (so long as they are feeling like students that day) they will continue to work until you say it is time for the next activity. But what about a child that needs a strict schedule? What if the idea of the "when?" concept drove you crazy?? But when exactly? Imagine if you were working at a job and your boss said you'd get paid... sometime soon. What do you MEAN sometime soon?? I want a schedule! I want to know when! Children on the Autism Spectrum (the prime example I can think of) really benefit from a device that shows a visual representation of time. It takes away the necessity for understanding the concept of time and allows it to be representing visually -- a sand timer of sorts that you can set for whatever time you want. The child can see the time count down. TimeTimer is really the best device that I know on the market, but I will definitely keep an eye out for any other products that are similar. They have a bunch of different size timers as well as apps for PC/Mac and iPod/iPad apps. No Android app yet released, but I did e-mail the developers today to see if there was anything in the works for those of us on the Droid side. So -- this is my first product review on an awesome device that I think is worth a purchase! More to come later... ~*~
Labels:visual support | 0 comments
Email This BlogThis! Share to Twitter Share to Facebook

And the work week ends...

Another week is over, and unfortunately it was not the best of weeks sadly. I caught a cold and ended up losing my voice from coughing. Croaking and squeaking out animal sounds or "more please" to my two year old clients might frighten them!

I figure I will start my blog out with an intro into what I do.

I get paid to play play doh. I bark and meow. I play Hungry Hippos and Candy Land for a good part of my workday. When I am not playing awesome games, I am helping families communicate with their children. I help moms and dads and caregivers have more successful interactions with their kids. I help children tell their needs and wants and reduce their frustrations. I watch kids learn to read and write stories, and hear them go from their first words and sounds to sentences and conversations. It is the best job.

I am a pediatric speech-language pathologist, and my job ROCKS!

I am a (relatively) newly minted speechie. I graduated from the University of Florida in 2010 with my Masters. I highly recommend this field. Best recommendations? Patience, a willingness to learn for life, a willingness to be goofy (!), and a love of kids if you work with that population.

Now, I should add here the PSA that speech therapists do a lot more than just work on "r" problems. Part of our training and field includes work in voice, feeding, swallowing, cognitive, and reading therapy. I so far have primarily specialized in early intervention work, reading and writing, language disorders, and some pragmatics work. I work with a lot of different kids and all of them have something about them that makes me smile

I hope to share any ideas and happy/funny stories on here as they happen. I look forward to sharing with other speeches out there in cyber world.

7:43 PM | Posted by Unknown |
Hello! Starting up a new blog, yet again, to deal with interesting findings/musings on my life and my career as a speech language pathologist. Hope to get some good info on here for all! ~*~
| 0 comments
Email This BlogThis! Share to Twitter Share to Facebook
Newer Posts Home
Subscribe to: Posts (Atom)

Let's talk! Check the right hand side for links to recent and older blog posts. See above for informational pages and my Amazon.com Associates store.

Thanks for stopping by!